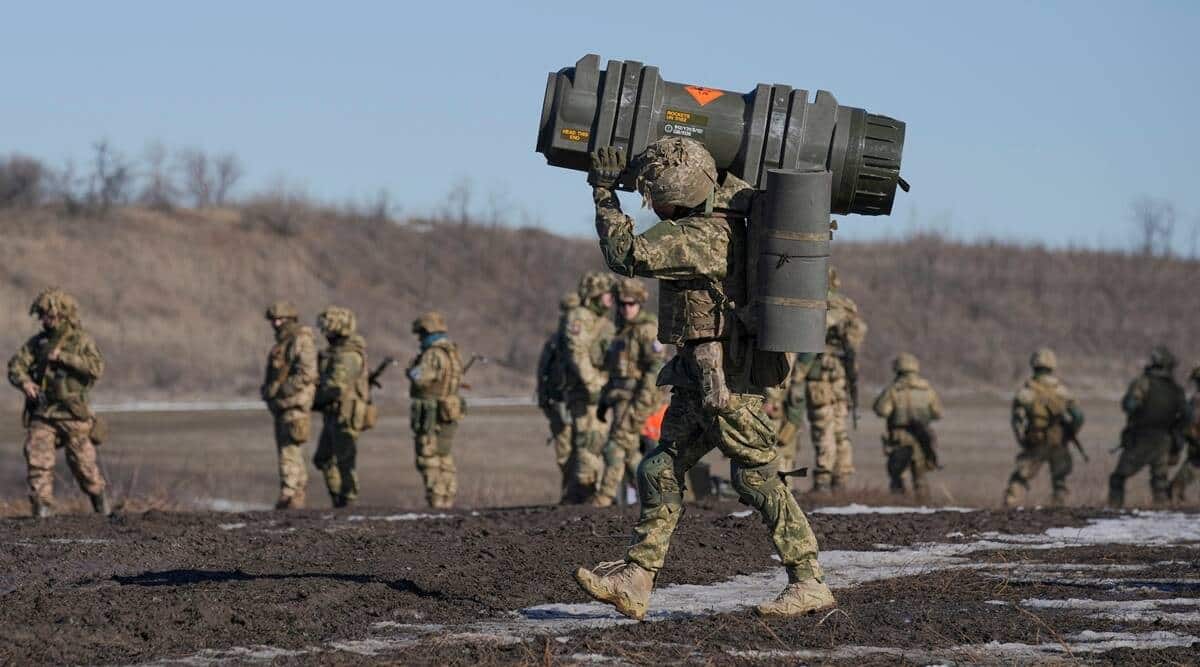 Tensions also spiked Thursday along the line that separates Ukrainian forces from Russia-backed separatists in the country’s east, with the parties accusing each other of intensive shelling.

President Joe Biden said on Thursday that there is a “very high” risk of a Russian invasion of Ukraine and that could happen within “several days.” Speaking at the White House, Biden said the United States saw no signs of a claimed Russian withdrawal of forces along its border with Ukraine.

He said the US has “reason to believe” that Russia is “engaged in a false flag operation to have an excuse to go in.” He told reporters in Washington: “Every indication we have is they’re prepared to go into Ukraine, attack Ukraine.” The move comes amid heightened tensions between Russia and the US, fuelled by fears that Moscow plans to invade Ukraine.

Tensions also spiked Thursday along the line that separates Ukrainian forces from Russia-backed separatists in the country’s east, with the parties accusing each other of intensive shelling.

Western fears resurged that Russia is planning to invade Ukraine, after weeks of East-West tensions that have threatened Europe’s post-Cold War balance of power.

The US and its NATO partners said they had seen no sign yet of Russia’s promised troop withdrawal.

“We’ve seen some of those troops inch closer to that border. We see them fly in more combat and support aircraft,” US Defense Secretary Lloyd Austin said at NATO headquarters in Brussels.

“We see them sharpen their readiness in the Black Sea. We even see them stocking up their blood supplies. You don’t do these sort of things for no reason, and you certainly don’t do them if you’re getting ready to pack up and go home.” Russia held out an offer of diplomacy, handing the US a response Thursday to offers to engage in talks on limiting missile deployments in Europe, restrictions on military drills and other confidence-building measures.

As US Secretary of State Antony Blinken headed to New York for the UN Security Council meeting and then Germany for the Munich Security Conference, Russia delivered its long-awaited responses to US proposals on Ukraine and broader European security. A senior State Department official said the Russians had presented its response to US Ambassador to Russia John Sullivan in Moscow.

Positive signals from Moscow lowered the temperature in the crisis earlier in the week but the heat was back up Thursday, where Western powers estimating Russia has 150,000-plus troops massed outside Ukraine’s borders.

“We have seen the opposite of some of the statements. We have seen an increase of troops over the last 48 hours, up to 7,000,” said British Defense Secretary Ben Wallace ahead of a meeting Thursday of the western alliance in Brussels.
That squared with what a US administration official said a day earlier. The top EU official said similar.

“The fact that you’re putting a battle tank on a train and moving it in some direction doesn’t prove a withdrawal of troops.” While no attack materialised Wednesday as some had feared, Western officials warned the threat of invasion remains high and vowed to counter it.

“The consequences of this mass buildup – nearly 60 per cent of Russia’s land combat forces on the border of a sovereign nation – will get you the opposite effect,” Wallace said.

“We are deadly serious,” he added, “and we’re going to face the threat that is currently being posed.” Moscow said several times this week that some forces are pulling back to their bases, but it gave few details that would allow for an independent assessment of the scope and direction of the troop movement.

He said that some of those units already had arrived at their bases after a 700-kilometer journey east.

Troops deployed for exercises in Crimea, which Russia annexed from Ukraine in 2014, have moved back to Chechnya and Dagestan in Russia’s North Caucasus, he noted.

He also said Russian troops involved in drills Belarus will also move back to their garrisons after war games there wrap up on Sunday.

Konashenkov didn’t mention the numbers of troops that were deployed and didn’t say how many of them returned.

NATO, meanwhile, has moved troops and military equipment into Eastern Europe in a display of resolve of meant to deter any Russian aggression and underline its intent to defend NATO’s eastern members, in the unlikely event that they too become a target.

The US has started deploying 5,000 troops to Poland and Romania. Another 8,500 are on standby, and some US troops are expected to move toward Bulgaria.

Britain is sending hundreds of soldiers to Poland, offering more warships and planes, and doubling its personnel in Estonia.

Germany, the Netherlands and Norway are sending additional troops to Lithuania. Denmark and Spain are providing jets for air policing in the Baltic Sea region.

Even if an attack doesn’t materialise, the sustained Russian pressure on Ukraine has further hobbled its shaky economy and left an entire nation under constant strain — a situation that could last indefinitely.

Ukraine already has been the stage of fighting for eight years, and tensions soared again Thursday in the conflict in the country’s east, where Russian-backed separatists have been fighting Ukrainian troops since 2014.

Separatist authorities in the Luhansk region reported an increase in Ukrainian shelling along the tense line of contact, describing it as a “large-scale provocation.” Separatist official Rodion Miroshnik said rebel forces returned fire.

Ukraine disputed the claim, saying that separatists had shelled its forces, but they didn’t fire back. The Ukrainian military command charged that shells hit a kindergarten building in Stanytsia Luhanska, wounding two civilians, and cut power supply to half of the town.

An observer mission of the Organisation for Security and Cooperation in Europe is expected to offer its assessment of the situation later Thursday.

Ukrainain President Volodymyr Zelenskyy tweeted that “the shelling of a kindergarten in Stanytsia Luhanska by pro-Russian forces is a big provocation,” adding that the OSCE monitoring activities are “an additional deterrent.”

Asked about the flare-up of hostilities in the east, Stoltenberg said the alliance was concerned “that Russia is trying to stage a pretext for an armed attack against Ukraine.” Russia, in turn, aired worries that hawkish forces in Ukraine, encouraged by the West, could launch an attack to reclaim control of the rebel areas — plans Ukrainian authorities deny.

A 2015 deal brokered by France and Germany helped end the worst of the fighting in eastern Ukraine, but regular skirmishes have continued and a political settlement has stalled.

The UN Security Council is scheduled to hold its annual meeting on the agreement on Thursday.

Russia denies it is plotting an invasion but says it’s free to deploy troops wherever necessary to counter threats from NATO.

It wants the West to keep Ukraine and other former Soviet nations out of NATO, halt weapons deployments near Russian borders and roll back forces from Eastern Europe, the demands the allis have flatly rejected.

There have been some suggestions Ukraine could decide to abandon its hope of joining NATO — something written into its constitution — as a way out of the crisis. It’s not clear how or if it would do that.

While the US and its allies have rejected Moscow’s demands to bar membership to Ukraine, they offered to engage in talks with Russia on limiting missile deployments in Europe, restrictions on military drills and other confidence-building measures.

Russian President Vladimir Putin charged that Moscow had offered to discuss those issues years ago, but the West only agreed to talk about them now.

He said that Russia was ready to talk about them now, but only in conjunction with its main security demands.

Even as Russia seemed to try to ease tensions this week, Maxar Technologies, a commercial satellite imagery company that has been monitoring the Russian buildup, reported continued heightened military activity near Ukraine.

It noted a new pontoon bridge and a new field hospital in Belarus. It also said that some forces had left an airfield in the country, a Russian ally, but it was unclear where they went.

Blinken and US Vice President Kamala Harris were among political, military and diplomatic leaders heading to the annual security conference in Munich that will see urgent consultations on the crisis.

Financial Express is now on Telegram. Click here to join our channel and stay updated with the latest Biz news and updates.